In the last couple of years, Government of India has taken several initiatives to increase the insurance penetration and density in the country. Some of the major initiatives include, increase in FDI limit, accidental insurance benefits to PMJDY Accounts, insurance at a nominal price under Jan Suraksha Scheme, free health insurance under Ayushman Bharatand travel insurance to railway passengers etc.

All these schemes have helped in spreading awareness about insurance, especially in the rural landscape. Withincreased awareness coupled with Government’s policy support, the Indian insurance sector has continued to grow at a higher pace, compared to other financial sectors in the economy.

During the period 2000-01 to 2019-20, the life insurance business registered a CAGR growth of 16% in total premium &19% in new business premium collections and non-life segment grew by 16% and now strives to tap the huge potential opportunities. This impressive growth has driven by entry of new players with significant growth aspirations and capital commitments, which is noticeable in terms of products, policies, and premium collections. Despite the strong growth, the Indian insurance industry faces some difficulties like capital raising, tight regulations, and mis-selling etc.

In 2000, Indian insurance sector was opened for private players and several global players had entered the market through joint venture with Indian peers. In the last 20 years, these companies have explored many new distribution channels, have done product innovations to boost business.

However, due to the nature of this business, the sector needs more capital for growth and regulatory needs. The Covid-19 pandemic has shown that further penetration of insurance in India is needed, and for that capital infusion is required.

However, the Indian promotors are not able to invest further capital in the sector. Further, some insurers need fresh capital infusion to meet the regulatory solvency margins.In this circumstance, the need of the hour is to support the insurance business in India, with proper regulations, which will help to achieve the national agenda of ‘financial inclusion’ in the country. 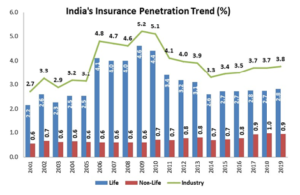 In the Union Budget for 2021-22, Government has proposed to increase the FDI limit in insurance companies to 74% from the present 49%, with Indian management control. Under the new structure, majority of directors and management persons would be resident Indians with at least 50% of the directors being independent directors and a specified percentage of profits being retained as general reserve.

Earlier, Government has liberalised the sector to 49% from 26% in 2014 but took more than a year for the necessary guidelines to come in place. However, the process was relatively faster when FDI in insurance intermediaries was liberalized to 100% in 2019. Though, the move is the need of the hour, but it should be implemented quickly, so that will help to the capital starved companies to meet their growth and regulatory capital.

It is also expected that fresh capital will bring a new wave in better technical know-how, innovation, and new products to the advantage of the consumers. This may push up the insurance penetration in the country, which is staggering at a very low level, compared to peer group of countries around the world.

III. Impact on Equity Capital of the Insurers

In our view, this may happen in two scenarios: first, dis-investment of the Indian promoter’s stake to 26%; or Second, by keeping the Indian promoter’s stake at present level (in amount), but enhance the foreign investments, so that the new ratio of domestic and foreign insurer stake would be at 26:74. In this paper, we have estimated the amount of capital may flows into the sector through foreign investments by both the scenario.

In our view, Government may favour the second scenario, i.e., to issue fresh shares for extra foreign investments, rather than sale of stakes by the domestic promoters. In this scenario, we estimated that the insurance companies may receive around `61,085 crore ($8.5 billion) of additional foreign investment due to increase in FDI limit over a period. Further, it is estimated that Rs 5,000-6,000 crore of fresh investment in the sector in the next 1-2 years and $10,000-$12,000 crore in the next 5-years and around Rs 60,000 in the next 15-years (calculated based on the assumption that Indian promoter not divest capital from the JVs).

However, if Government would allow to the domestic promoters to divest their stake (first scenario) in the insurance companies, it is estimated that a maximum of `16,250 crore additional investments may flow to the industry, through foreign investments. In the first scenario, the objective of FDI limit hike may not achieved, as the capital base will remain same and the insurers are not able to expand their footprint to achieve the national agenda of financial inclusion.

However, as per the latest available data (Mar’2019), the average FDI investments in the 23 private life insurer is only 35.5%, 30% for 21 non-life private insurers and 31.7% for the 7-specialised health insurance. However, the question is that whether foreign investors are really interested in Indian insurance sector? If yes, thenwhy the FDI used limit is still only at 33.8% in private insurers?

IV. Benefits to the Stakeholders

Insurers need capital to maintain a healthy base, offer a wider bouquet of products, and protect consumer interests against insolvency. Increased capital inflow will enable insurers to offer products that are capital-guzzling but work in the customer’s interest without taking a toll on their bottom lines.

It will also incentivise insurance intermediaries such as brokers and web aggregators through higher commissions. The increased capital inflow is also likely to give a fillip to relatively new private life insurance companies that have seen a decline in new business premium over last two years.

The insurance industry not only protects human life but is also a key resource for raising funds for the long-term projects in the country like infrastructure etc. Recently, Government has estimated that India would need to spend $4.51trillion oninfrastructure by 2030 to realise the vision of a $5 trillion economy by 2025, and to continue on an escalated trajectory until 2030. Increasing FDI in insurance is one way of meeting the funding gap.

The budget moves may help the banking fraternity in two ways; firstly, the big banks like SBI, ICICI Bank and HDFC Bank may reap higher revenues (non-interest income) due to their wide distribution network, as international companies may pay a premium to exploit their franchise. Secondly, if the first scenario of disinvestment (refer section III) is considered, then public sector banks (PSBs) may be benefited to sale their stake in insurance business to meet the desired capital requirement under Basel III.

The Indian insurance industry has always been an attractive market for global insurers to expand their business in the country, mainly due to demography profile and untapped business opportunities. In some countries, say Japan, South Korea, Vietnam, Hong Kong and Taiwan etc, are allowed allow 100% FDI.

In this context, the Union Budget moves to increase the FDI limit in insurance is a welcome move, which aims that the global investors to bring in the much-required foreign capital to meet the industry needs.This may help the insurer to expand their footprint to support Government’s objective of financial inclusion, through insurance inclusion in the country.

Going forward, the present low interest rate scenario may help the insurance sector to push up the business but the return on investment would decline due to the fall in G-sec yields (Parida& Acharya, 2014). So, this is the best time for the insurers to tap the rural market and sustained in the business for a long term.

Further, we expect Government should look into the following measures for a robust insurance industry: (i) simplify the KYC norms and demat accounts to a single unit across all financial products, (ii) Zero/5% GST for pure protection insurance policies, (iii) separate deduction limit for premium paid on health/life insurance.

Hope budget moves would be positive for all the stake holders!!!

close
Start typing to see products you are looking for.